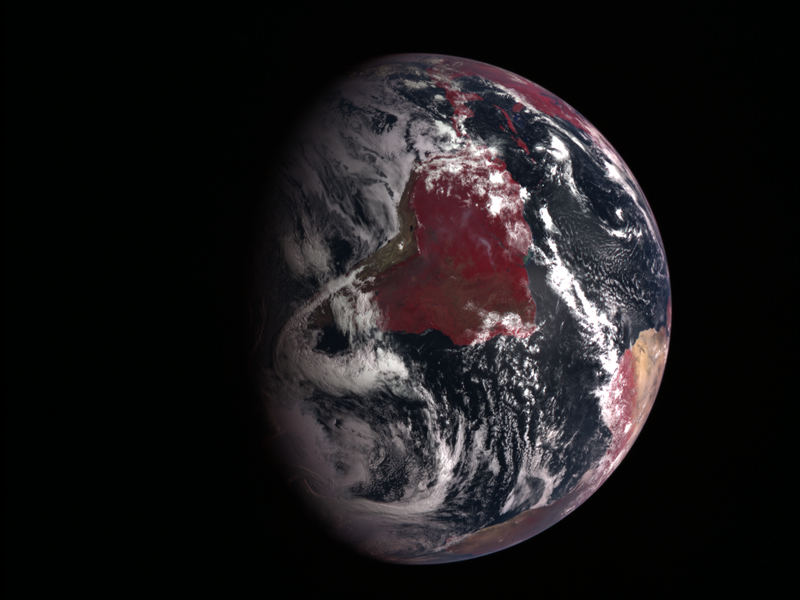 An abundance of life: Plant-covered land is red in this combined visible light/infrared view of Earth from the Messenger spacecraft.
Read more at https://www.airspacemag.com/daily-planet/cosmic-zoo-vs-rare-earth-180967... Source: NASA

In our new book, The Cosmic Zoo: Complex Life on Many Worlds, MIT researcher William Bains and I address astrobiology’s central question: Is life likely to exist elsewhere in the universe? We’re interested in more than just microbes. We also want to know whether complex life—plants, animals, and even intelligent technological beings—are out there. In other words, are we living in a cosmic zoo? And are humans a galactic oddity, or are other smart and technologically capable life forms likely to evolve on rocky planets like ours?

Scientific advancements are starting to give us the tools to answer that question. In our book we lay out the story of life on Earth, from its origin to the appearance of humans, and consider what this implies for its possible occurrence elsewhere in the universe. We conclude that many of the critical transitions that happened on Earth—such as the invention of photosynthesis or the rise of multicellular life—would likely occur on other planets as well, because there are many biochemical pathways they could have followed.

That leads us to disagree with a very influential book, called Rare Earth, published by Peter Ward and Ron Brownlee more than 10 years ago. They argued that our planet’s history was shaped by a set of more or less random factors that are collectively highly unlikely. According to Ward and Brownlee, Earth is a statistical fluke, and life is a rare phenomenon. In their view, this is even more true for complex, macroscopic life, since a larger number of conditions have to be met for it to arise and survive.

Ward and Brownlee may be right that our planet is unique, or nearly unique, just as there was only one Mozart and one Beethoven. But that doesn’t mean there haven’t been other composers throughout history, creating other styles of music, from Bach to boy bands. In this book we consider the “music of life” in all its possible variations, not just the one composition played on Earth.

That leads us to the conclusion that complex life is common on other worlds. Given that there are an uncountable number of planets out there, many of them seemingly habitable, and many of those habitable for long enough to evolve complex organisms, we have reason to think that complex life will arise and prosper. We are, in fact, living in a cosmic zoo.

There are two parts of this argument, however, where we admittedly have to rely mostly on speculation: the origin of life, or rather, the transition from “non-life” to life on Earth, and the survival of technological intelligence. Many animals on our own planet show intelligence, including octopi, parrots, dolphins, and apes; it appears to be a fairly common theme in evolution. Only one species—humans—has evolved to create technology. And we still struggle to explain why.

An electronic version of The Cosmic Zoo is also available directly from the publisher.

How to Test the Cosmic Zoo Hypothesis Early Habitabitabilty Window on the Moon